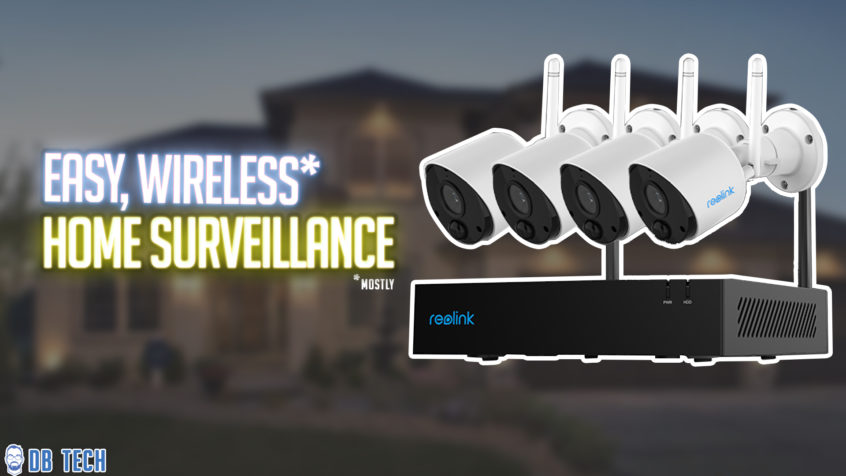 The folks over at Reolink reached out recently to see if I would be interested in taking a look at one of their home surveillance systems. After some emailing back and forth, they sent over the RLK4-211WB4-S 4-Channel WiFi Security Camera System.

In this video/blog post, we’ll take a look at that system.

The packaging the system arrived in was nicely sorted into a couple of boxes. The first box had the Network Video Recorder (NVR) and its accessories. The other box contained 4 cameras, their antennas, other accessories, and mounting hardware and home stickers to place in your windows letting people know that your house is being monitored by Reolink.

The cameras are IP65 certified weatherproof so they’ll stand up to rain and snow without much of an issue. I say “much” of an issue as my cameras seem to start having signal loss when the temperature gets below freezing temperatures.

In the Reolink kit, you’ll find some templates to stick to the wall where you’d like to mount your cameras and this makes the installation process super fast and easy.

Getting the cameras to talk to the NVR is pretty straightforward as long as you have your smart phone with you. There’s a mobile app you can get to manage your system. Adding cameras is as simple as having the camera scan a QR code on your phones screen and waiting for the camera to connect to the network.

The applications for both Windows and Android have lots of options that make configuring the system very easy. Even though I’ve got a 2TB 7200RPM hard drive the NVR manages to show me old footage quickly while still recording new footage.

The footage that the Reolink surveillance system collects can go as high as 1080p at 15 frames per second.

If you have questions or comments, please feel free to leave those in the comments section and I’ll respond as quickly as possible.

If you would like to pick up one of these surveillance systems for yourself, Reolink has provided an 8% coupon:

8% off permanent code for all products on the Reolink website only: ytbrlk4