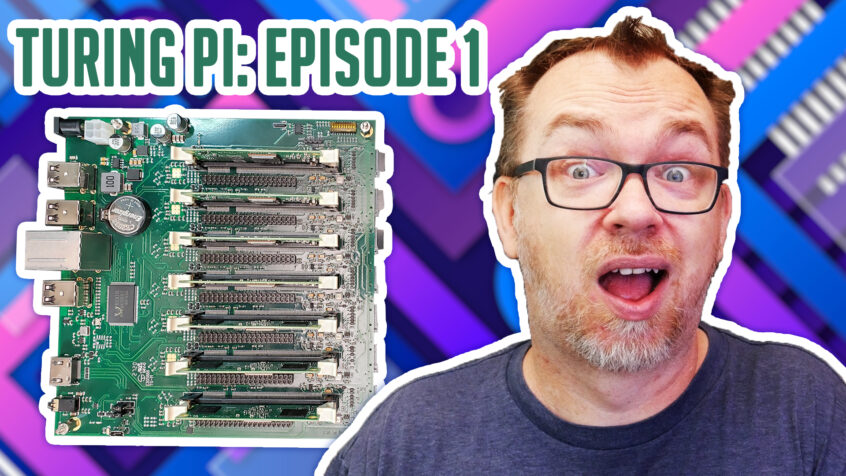 The folks over at Turing Pi reached out and asked if I would be interested in taking a look at their Turing Pi device.

If you want to get your own Turing PI, check out this link (affiliate link) and get 10% off your order!!

Currently the Turing Pi board supports the Raspberry Pi Compute Module 1, 3, and 3+ compute modules either with or without eMMC.

As I mentioned earlier, you can have up to 7 compute units but you don’t HAVE to populate all of the slots for it to work. You can start with just 1 compute module and add additional modules as you need. What’s more, you can install or swap out additional compute modules without having to power off the Turing Pi!

Features of the Turing Pi Board

The board is Micro ITX size so you can fit it in a compatible computer case.

You can power the board (and all 7 modules ) with an ATX power supply 2×2 cable. Another option would be with a 12-16 volt barrel-jack that supports up to 60 watts.

A built-in network switch gives each board a 100mb connection to a single gigabit RJ45 port.

There is a full-sized HDMI port as well as a 3.5mm A/V port.

Each compute module also gets its own 40 pin GPIO for added functionality.

About the Compute Modules

The compute modules (CM) 3+ features the same core and functionality as the Broadcom BCM2837B0 SoC from the Pi 3 Model B+ without any of the I/O like network, USB, etc.

Compute modules have a 4 core processor and 1GB of RAM.

Multiple SKUs of the modules as well. Some of them have NO eMMC flash chip onboard while others have 8GB, 16GB, or 32GB of storage onboard. Something to keep in mind about these chips is that, if a CM has onboard eMMC, they must boot from the eMMC chip and won’t be able to boot from the microSD card. If the CM has no eMMC, it will have to boot from a microSD card.

In an upcoming post/video, I’ll be showing how to flash each type of compute module as the process is different for each of the 2 types.

I want to give a big thanks to Turing Pi for reaching out and offering to send over this setup! You can pick up your own Turing Pi board starting on October 1, 2020 at 9am PDT per their website.